Posted on 18. May 2013 by reisendesmikro / travelling mic

Yasmine El Baramawy’s brave TV appearance has made her a well known activist in the fight against sexual harassment and sexual violence. She – and other women – were sexually violated during a protest against president Mohamed Morsi’s constitutional declaration in November 2012 on Tahrir Square.

When similar attacks happened to at least 20 women two months later, on the second anniversary of the 2011 revolution, Yasmine decided to tell her personal story in a talk show.

I have met her in her Cairo flat for a long conversation in April 2013.

Yasmine is a composer and musician, and played the Oud for me to record:

I first asked Yasmine about the beginning of the 2011 revolution, what she remembered best from the 18 days between January 25th and February 11th:

Tahrir Square, December 23rd 2011: ‘Friday of Reclaiming Honor’, referring to the “blue bra girl”, a woman who was brutally beaten by soldiers and stripped while being dragged away.

On February 11th, when Mubarak finally stepped down, what did she feel?

The protest during which Yasmine was attacked and violated, were against the new president Mohamed Morsi’s constitutional declaration in November 2012, through which he granted himself generous power. After the strong protests opposing this decree, he annuled it in December.

(Vocabulary: Muslim Brotherhood: Mohamed Morsi was a member until his election as the Egyptian president. Salafis: ultra conservative islamists, not necessarily a political movement, but in Yasmine’s application of the word, it is. kanaba-party: “sofa (political) party”, e.g. the people who usually sit in front of the TV on the sofa and complain about politics instead of going down to the streets to protest)

Having said that the islamist parties in power were the only ones to profit from weakening the opposition, does Yasmine think that people were paid to rape and assault during these protests? She also describes the pattern of the assaults.

Yasmine describes the situation: she got attacked in clashes, not during peaceful protests, on November 23rd, 2012.

How her surroundings reacted when Yasmine asked them to make the topic of sexual violence during protests public.

Yasmine talks about her feelings and thoughts around the refusal of public persons to openly talk about sexual violence against protesters.

Two months after her assault, when “sexual terrorism” occured on Tahrir Square again, on the second anniversary of the revolution, January 25th, Yasmine decided to talk about sexual violence herself.

Yasmine told her story in a talk show on the Al-Nahar TV channel. The reactions to her appearance were very positive. Instead of calling her a “whore” – as she had expected – people called her a heroine.

Yasmine wants to thank the people who had ignored her, because they “obliged me to go stand for myself”. She was forced to live through her personal revolution. 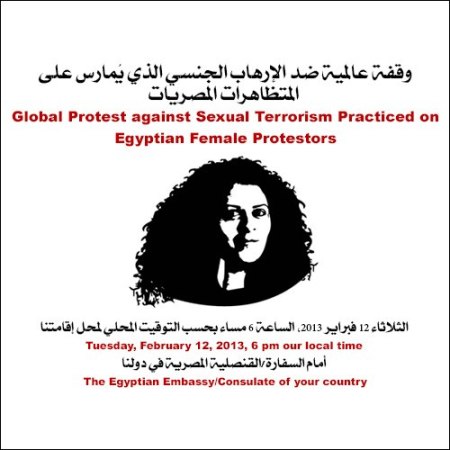 Yasmine’s picture was prominent on the call for global solidarity protests.

Human Rights groups and assaulted women agree that the violence was organised. The organisation “Nazra for feminist studies” has published a position paper on the topic in February 2013. It also addresses the connection between the extremely violent acts and the everyday sexual harassment women in Egypt experience.

You can find extracts from my interview with Nawara Belal from “Nazra” here (April 2011) – some interesting, somewhat historical material.